Goodbye May & the old Iwaya. We will never return to this moment again...whatever happens.
Posted by Iwaya at 9:02 PM No comments:

Email ThisBlogThis!Share to TwitterShare to FacebookShare to Pinterest
Labels: Maurien Briggs Was Here

The True State of 'Things' in Uganda and Ugandan Politics

Can you spot who is the Vice President and who is the Secretary General of a political party in this photo?  Hard to believe but the Vice President (pre-May 12, 2011) is the guy in the cap almost doubling over to show respect to Amama Mbabazi, former Secretary General of the National Resistance Movement that rules over Uganda.
This photo was taken at a time when former Vice President Gilbert Bukenya was still in that office and Mbabazi was yet to be appointed Uganda’s Prime Minister. But all along Mbabazi had always had a moniker attached to his name, “The Super Minister” supposedly because he is so close to President Museveni and there was  a time when he simultaneously ran three vital offices.
The photo however speaks volumes about who was the real power, still is... 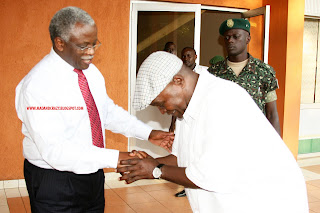 The Day My Father Died

“It was the worst day of my life,” he said, “The day my father died.”
I had never heard him speak of his father.
I had heard him speak of his brothers, their one sister, their mother. He had many stories of them. They were an extraordinary family, from the stories he told me, seated next to me, in that cubicle, when we were not computing, our eyes reddening from the glow straining through the glare of the computer screens…he looked forward to family time, when the whole laughing, joke-cracking, elbow twisting 8 of them were in one room, joshing and unable to sit still, restlessly restless in each others' company, topping each other off…
But I had never heard him speak of his father. And when he spoke of his father, I remembered instantly, States of Emergency by Andre Brink, and the ‘difficult relationship’ sons have with their fathers.
Fathers are never just fathers, like mothers are mothers. A mother is like your palm, the fingers on your hand…but a father, a father is something else…a father is an event…
When I heard him speak of his father, it all came tumbling, Andre Brink’s words in States of Emergency…
“Even after his father died there was no respite. The problem was: he wasn’t dead, when they buried him. For years and years that stern face, that voice dark with scorn and disappointment, has continued to haunt him. How many years does it take for a father to die within a man? How long to make one’s peace with the dead and oneself? Has that brooding, grieving old man finally been laid to rest, or will he always be revived in quests like this?”
Posted by Iwaya at 6:46 PM 3 comments:

Email ThisBlogThis!Share to TwitterShare to FacebookShare to Pinterest
Labels: Maurien Briggs Was Here

The Walk to Work demonstrations, to me

I support the walk to walk demonstrations. I’m all for the W-2-W. Not because I’m some naive political innocent, staking political allegiance for the very first time, believing, as some believed in 2001, that Dr. Kizza Besigye was the long awaited messiah come to rescue us from the morass that has become President Yoweri Museveni’s rule of Uganda. Forum for Democratic Change leader Besigye is at the forefront of this Walk to Work demonstration, just as he led in stepping out to show that it President Museveni could be challenged. That it was possible to no longer believe in the long perpetuated myth that ‘Mzee’ was all knowing, a father to us all, and it would be impolite to challenge him.
At the time of coming on board to support the walk to work demonstrations as a form of protest, an alternative way of registering defiance to and disagreement with a political ‘party’ and leader who had just ‘won’ by a landslide 68% in the 2011 February presidential elections, Dr. Besigye simply found an idea waiting to be rolled and his ‘job’ was simply to give it a public face. The architects of the walk to work demonstrations, that somewhat remind any history buff of the 1950s-1960s American Civil Rights Martin Luther King led walks against segregation, that in turn hark back to the Indian Mahatma Gandhi 1920s-1940s walks against everything from British Imperialism to unfair economic conditions where the poorest peasant could not afford to buy the salt they mined, were not Dr. Besigye or contested Democratic Party leader Norbert Mao or the Uganda People’s Congress former Ambassador Olara Otunnu.
The architects, the brains behind the walk to work demonstrations were Muwanga Kivumbi, Mathias Mpuuga and Mukono North MP, Betty Nambooze Bakireke.  Far from spotless characters, they nevertheless believed that it is possible for Ugandans to come together and demand a change. This is probably why before the walk to work demonstrations, they had formed an Activists for Change group that transcended their political party groupings and sought to form an arena where concerned Ugandans can air their grievances and plot how to find redress. It is that last part that particularly appeals to this blogger. That A4C, as they have dubbed their Facebook page, do not just want to be a complaining platform, they actually are trying to come up with solutions.
This is where the W-2-W comes in. W-2-W is not about Dr. Besigye though the government propaganda machine has worked its damn hardest to try and reduce it to the person of Besigye. It is about the appalling economic situation Ugandans find themselves in today led by an unresponsive government that folds its hands and declares, “There’s nothing we can do,” to alleviate your suffering, but you have got to keep paying those taxes on time. W-2-W is about many Ugandans finding, those who have jobs, that pretty soon those jobs will have no meaning because they can barely afford the transport costs from home to the place of work, fuel prices so high, to work will be like earning money that never settles in your wallet, you are working for your transport costs, your food costs, rent---and you have nothing left for yourself. W-2-W demonstrations are all about the things that have been going wrong with Uganda since Ugandans first had self rule, decided to keep the faith in leader after leader because each leader promised there would be a change and now we find ourselves in worse straits than we were 50 years ago and suddenly we are all realising an important truth, “Politics is too important to be left to the politicians.” We have all got to get involved and struggle for a change towards where we wish Uganda to be headed.
Walk to work is about reminding you and me that this is our country. Nothing is going to get better if you and I do not stop thinking someone else will do something. It is you and I to do that something. Uganda is our final inheritance, in the end it is what we will pass on to our children, our descendants, rich or poor, this is the country that will be home, and what kind of home will we be passing onto them?
This is what walk to work demonstrations are about, for me. This is why I support the walk to work demonstrations whole-heartedly, though I may have doubts in some of the leaders and their intention. There is a whole lot of us, I believe, who are not FDC, who are not DP, who are not UPC, who scoff at CP, do not even want to be a part of any of them because they speak nothing to us-but the walk to work demonstrations that began April 04, 2011 do. There is a whole lot of us who have a hope that these walk to work demonstrations will be the beginning of a change in Uganda where the wishes and needs of the people come first and who is leading leads to please us. It is the hope of the  W-2-W, it is my hope.There's a whole lot of us hoping.
Posted by Iwaya at 9:40 PM 2 comments:

When Writers begin to join demonstrations on the street...

It is not every day that you find Ugandan writers on the street, in a sea of people demonstrating. Taking part of the sweaty, dangerous, unpredictable environment of the streets. But it is happening Kampala now. More and more often, writers and other ‘gentle’ professionals are leaving their sequestered environments to go out into the street and protest the skyrocketing prices of virtually everything from fuel to food to school fees…to-everything!
Last week, it was the lawyers under their Uganda Law Society downing their tools from Wednesday up to Saturday, promising not to handle any court cases as their form of protest against the way the law in Uganda is being ‘misused.’
Now women working with Uganda Women Network (UWONET) have joined the fray of complaints. It is not a new ‘thing’ for this blogger to see Ugandan women on the street throwing rocks with the men, I saw that a two weeks ago. The real surprise was to espy a respected writer and poet, in fact the brain behind the BNP awards among the demonstrators.
Here you go…
Posted by Iwaya at 6:02 PM No comments:

Many Colours, One People!